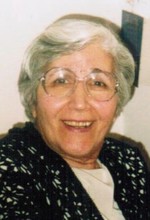 Lord, I love your Command. (Psalm 119)
Betty Dawisha, 92 passed away at home surrounded by her children on Wednesday, July 29, 2020 following a major stroke. She was born in Baghdad, Iraq, attending Baghdad College of Pharmacy, and practicing pharmacy before emigrating to the United States in 1962 with her husband, Michael Dawisha and three of her four children, eventually settling in Livonia, MI. There, she was homemaker and raised her four children. Having a career was important to her, trying her hand as a medical Technologist and Real Estate Agent before finding her true passion and second career in counseling / Psychology. She graduated from Wayne State University with a B.S. Of Science in 1983 and from the Center for Humanistic Studies in 1987 with a Master of Arts, both while in her 50's. She then embarked on a 25-year career as a counselor and clinical psychologist to abused/neglected children and their families at the Children's Center in Detroit, MI, where she worked full-time until retiring at age 84. She was beloved by all of her clients and the staff, who referred to her as "Ms. Betty." During this time, and up until 3 months before her passing, she hosted a radio program in Chaldean on the Chaldean radio station, The Chaldean Voice. She also provided pro bono telephone counseling and advice to friends, family, and the wider Chaldean community, who sought her advice and help. Her other real passion was sewing, designing and sewing her own fashions with inspiration from Vogue Magazine, re-upholstering furniture, designing and sewing drapes, and embroidery of wall textile art. Her Children's Center Mother's Group created the quilt adorning her casket in appreciation for her dedication, guidance, and support throughout her years there. Predeceased by her loving husband, Michael Dawisha, in 1996, to whom she was primary caregiver during his 9-years battle with metastatic prostate cancer. She is survived by her children (Samar, Samer, Sahar, Saman) , her three grandchildren ( Tam Lin, Nathan, Anna), and her siblings (Buddy, Nathim, Suham, and Najla). She took pride in remaining in her home into her 90s, and her final days were also spent at Home Hospice, cared for by her loving and devoted children, following a brief stay in the ICU at St. Mary's Hospital in Livonia, MI. A closed casket will be available at 9:30 AM, and Mass will be held at 10:00 AM at Mother of God Chaldean Church, 25585 Berg Rd, Southfield, MI 48033. Arrangements are by Mercy Funeral Home, 627 East 9 Mile Rd, Hazel Park, MI 48030. In lieu of flowers, the family requests memorials be made to The Children's Defense Fund at Childresdefense.org and the Chaldean Church.

Due to COVID-19 Family will receive condolences Via, text messages, email and phone calls.
Thank you for your support and prayers.
May the Lord grant her eternal rest.
May the angels carry her to Paradise. Amen

All rights reserved. This obituary is also archived at obittree.com